Can I have some beer
with my oil and gold?

Absa | Corporate and Investment Banking > Insights and Events > Can I have some beer with my oil and gold?

Like all good stories, this one starts in a [mythical because we’re South African] pub … but not for the reasons you imagine.

While the alcohol sector invariably draws strong feelings from across the philosophical divide during Covid-19, what is indisputable is that there are a number of integrated moving parts that have to work together to put a beer in front of a consumer. When the taps were switched off in your local pubs recently, it reverberated all the way through the entire value chain of beer making.

Reasons to be optimistic

The same applies to the Resources and Energy sector – the good news is that this is proving to be one of the under-stated recovery stories in 2020. Proof that there are reasons to be optimistic if you look for them.

It suddenly feels like we are back in the roaring 80s when gold was all the rage and if one takes a look at the current Gold price of USD2057/ounce, proving once again that Gold is a safe haven, amidst the dollar depreciation. In Rand terms if one takes into consideration the exchange rate volatility, the picture for gold is impressive: 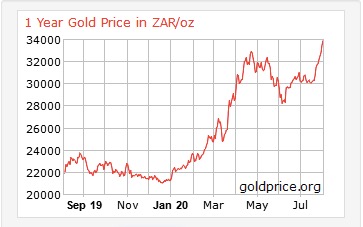 Copper, which is often considered as a good indicator of the health of the industrial or ‘real’ economy is actually trading higher than it was a year ago for example: 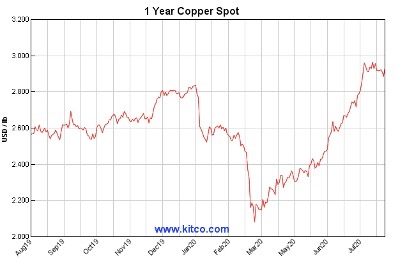 Those who follow the oil price will know that it has more than doubled after its unprecedented sell-off in March 2020. The sentiment on fuel demand globally because of the Covid-19 pandemic will have a determining impact on fuel prices. US crude inventory levels and a weakening dollar will also play their part in settling the oil price. A combination of slowly improving oil prices, recent discoveries and the push towards using gas as an environmentally friendly energy source is contributing to the renewed investor interest in the oil and gas sector on the continent. Africa is one of the leading regions in terms of oil and gas discoveries including the huge gas finds in Mozambique, Mauritania and Senegal will contribute significantly to meeting the growing demand for gas in the global energy mix.

While the sector has experienced an increase in negative investor sentiment over the past years because of rising production costs, infrastructural challenges, electricity supply, increasing environmental, social and governance standards and political and economic instability in certain regions, big name resource shares like Anglo American, BHP Billiton and Kumba have all recently hit new 12-month highs as interest in the resource sector picks up. All the factors mentioned above are placing business leaders under unyielding pressure to deliver superior returns to stakeholders.

Whilst every commodity has unique characteristics that have impacted their price movements, these new 12month highs are potentially great news for the African continent which holds over 30% of the world’s remaining mineral reserves and increasing finds of reserves of oil and gas.

Building sustainability through the value chain

The key to unlocking investments into Africa is for industry stakeholders to continue to collaborate responsibly to promote economic growth. The key role of a bank is evolving and now includes also making sure that where we provide funding, the economy and communities benefit. The trick now is building sustainability through the value chain… and it’s important that ‘sustainability’ is not dismissed as a ’nice-to-have’ but rather to see it as a critical part of the funding journey. Already we are seeing shareholder activists are pushing back against projects that don’t take into account environmental and sustainability related issues.

Issues such as climate change are no longer ‘soft’ elements that can be tucked away in a sustainability report somewhere. Shareholders and other stakeholders are demanding that the banking sector adopts a responsible approach to funding of new projects and this is driving a change in behaviour for all sector participants.

The question will remain whether the industry is doing enough with regards to carbon emissions to meet the goals of the Paris agreement on climate change and the scopes listed.

The Paris Agreement’s central aim is to strengthen the global response to the threat of climate change by keeping a global temperature rise this century well below 2 degrees Celsius above pre-industrial levels and to pursue efforts to limit the temperature increase even further to 1.5 degrees Celsius. Additionally, the agreement aims to increase the ability of countries to deal with the impacts of climate change, and at making finance flows consistent with a low GHG emissions and climate-resilient pathway. To reach these ambitious goals, appropriate mobilisation and provision of financial resources, a new technology framework and enhanced capacity-building is to be put in place, thus supporting action by developing countries and the most vulnerable countries, in line with their own national objectives.

The EU formally adopted into law a series of measures that included a binding target for 32% of electricity production to come from renewables by 2030. Achieving this would require at least a 50% reduction in global greenhouse gas (GHG) emissions by 2050, whilst global GDP could triple, and population could grow by more than 2 billion. Performance so far has been mixed, with global emissions increasing c.1% per year since 2015. We expect climate change to fundamentally reshape the Resources industry.

For many companies, the majority of their greenhouse gas (GHG) emissions and cost reduction opportunities lie outside their own operations, as these include Purchased goods and services, Business travel, Employee commuting, waste disposal, Use of sold products, Transportation and distribution (up- and downstream), Investments, Leased assets and franchises. While most of the industry has pledged to reduce operational ‘Scope 1 and 2’ greenhouse gas emissions, it is more difficult tackling those produced by their customers because of the complexities involved.

Green technology will be important to reduce carbon emissions in operations and reduce environmental impacts. The use of minerals and metals that support a transition to low-carbon technologies such as solar panels or wind power will be in demand. Use of water for mineral processing will have to be recycled.

Power supply issues are topical in all countries in Africa and it is encouraging to note that there are a significant number of sizeable diverse renewable power projects being rolled out across the continent. While there has been a major focus on the fields of renewable and more-green energy solutions like gas-to-power, coal will continue to play an important role in our African energy mix in the near-term.

Front-of-mind for all investors is a stable political and regulatory environment and one of the positives we noted at the Mining Indaba earlier this year is that the continent is making positive strides in this regard. The development of an indigenous resources service sector can be challenging due to the capital intensity of the sectors. To address some of these challenges, there is need for international companies to partner with local companies to raise the required capital and in-country capacity building and training. The fiscal framework must also be fair and transparent.

Labour and the Resource and Energy sector

One of the big unknowns for 2020 is the disruptive impact that COVID-19 will play on the relationship between Labour and the Resource and Energy sector. At the Mining Indaba, we noted that the relationship between the mining houses and their labour forces had – specifically in South Africa - improved and negotiations had been far less confrontational than in previous years. With organisations facing significant cost pressures, will tensions rise here?

Building on the question of labour, impact on surrounding communities is another key theme that corporates need to pay more than lip-service to. Greenfields mining projects have the ability to be a major catalyst for surrounding communities in terms of job creation and supporting small businesses - mining operations across the continent are becoming more and more sensitive to the role they play in ensuring the sustainability and their responsibilities here. As a funding partner, our deal teams will often conduct site audits and visits prior to approval of funding.

The commitment of 130 banks from 49 countries to the United Nations Principles for Responsible Banking which were adopted in September 2019 marks an important milestone for the banking industry and so for the Natural Resources & Energy Industry as well.

The Principles for Responsible Banking are:

Ultimately, all participants in the resources sector will need to recognise that the sector can no longer be open to exploitation. As a funding partner, we are committed to working with organisations who share our values and are prepared to invest responsibly throughout the value chain. As Absa we see ourselves as a natural partner to clients active across the natural resources and energy value chain in Africa.

If Africa is serious about maximising its exposure to the resource sector over the coming decade, a clear strategy relating to nickel, copper and lithium will be critical.

Banking on metals of the future

The next decade will be pivotal for the mining sector in Africa and there are numerous reasons to feel optimistic about deal-flow and transactions on the continent in the coming years.

Where does Africa fit into the global resource mix?

Shirley Webber explains how Africa is emerging as a global force in oil and gas markets and its growth in oil and energy demand is forecast to outstrip China in the coming years.